Summer 2014, VIDELIO-Events: The service provider of an entire anthology of Festivals

This summer VIDELIO-Events, the technical service provider of Sound-Light-Video takes part in more than 25 festivals, whether it is for caption, for broadcasting Video and Audio or even for video mapping. During the whole summer and throughout France, the VIDELIO-Events and Utram teams are working to bring ever more innovative and creative audio visual solutions, management of multimedia content, to magnify each of these events.

– The Festival Mawazine (30 May to 7 June): created at the initiative of the Cultural Association of Morocco on 23 October 2001, the Festival Mawazine Rhythms of the world is part of a process of opening up to cultures by providing the public a musical voyage around the world. Every year, for the past 12 years, the festival allows many artists, in particular Moroccans, to have a moment of unprecedented recognition mixing with the big international stars. The Utram teams were present and have provided for 5 displays of ornamental totem video walls in 20mm, a video wall for public announcements in 10mm as well as the projection. 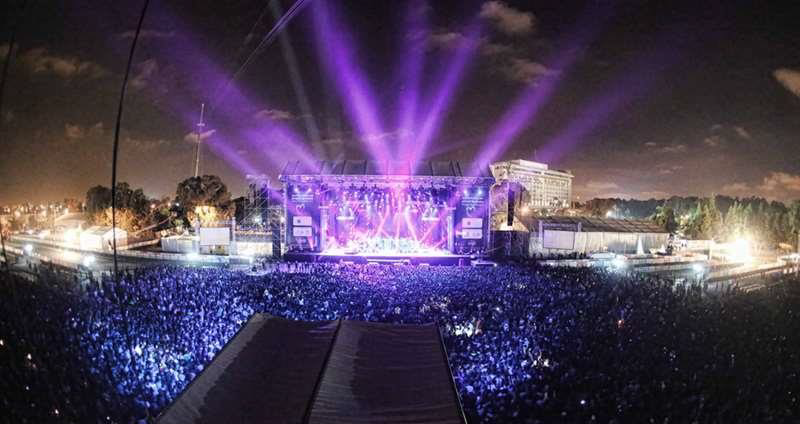 – The Festival Pyromélodie of Royat (28 June): the musical fireworks festival of Royat attracts near to 10,000 spectators and offers a very special event: the video mapping on the facade of a highly rated hotel in Royat at the same time of a pyro-technical show. The area of the projection of the mapping is 22 metres in 4/3. The VIDELIO-Events team have installed the control room and the video projector in a building 40 metres away from the facade on which the multimedia content was projected. 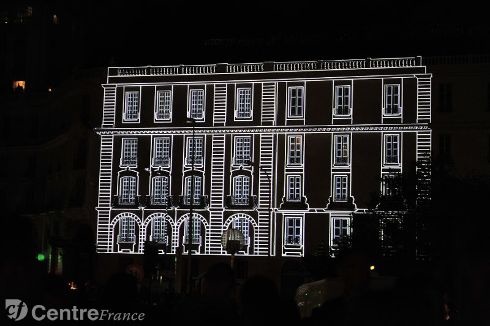 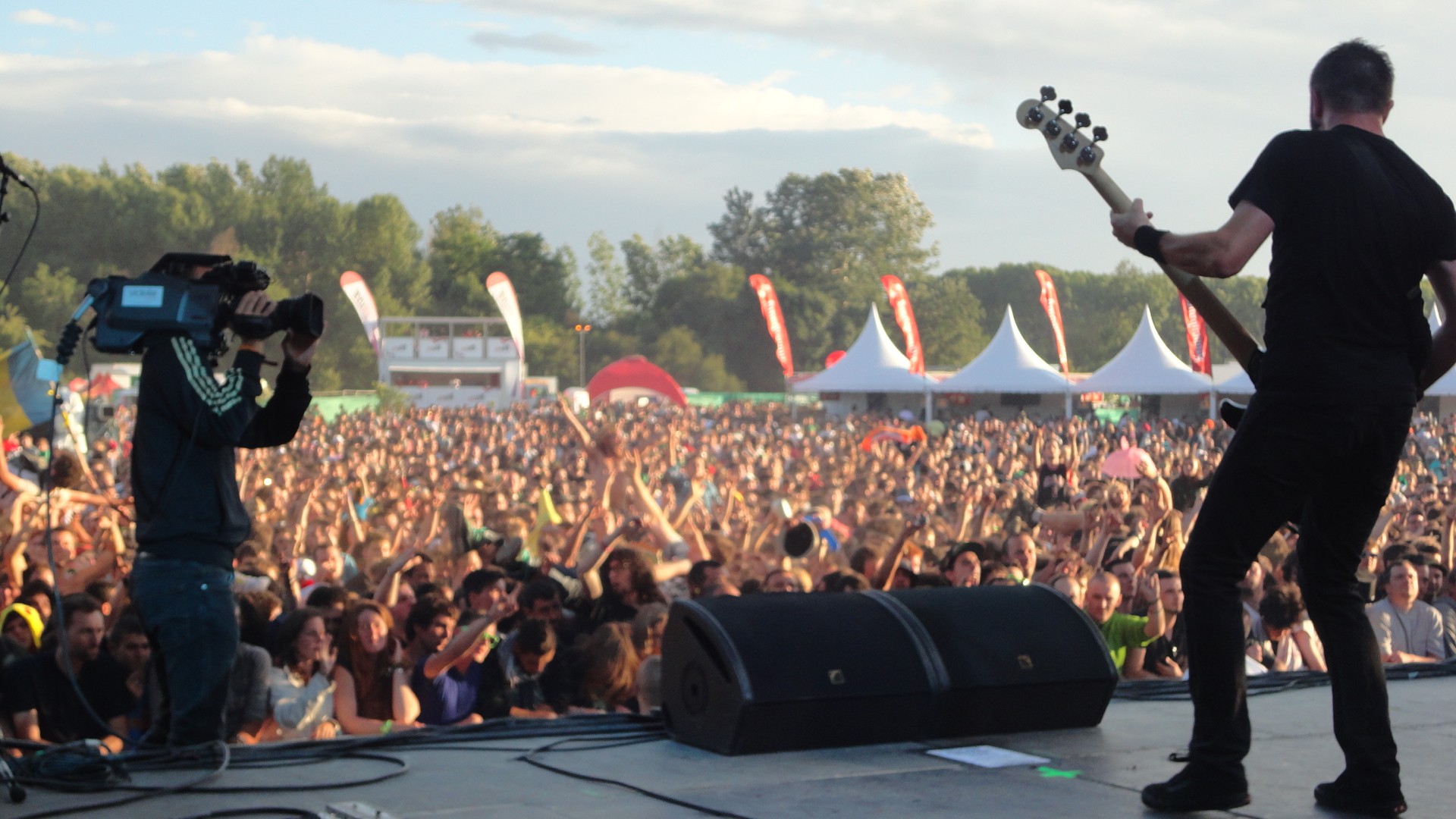 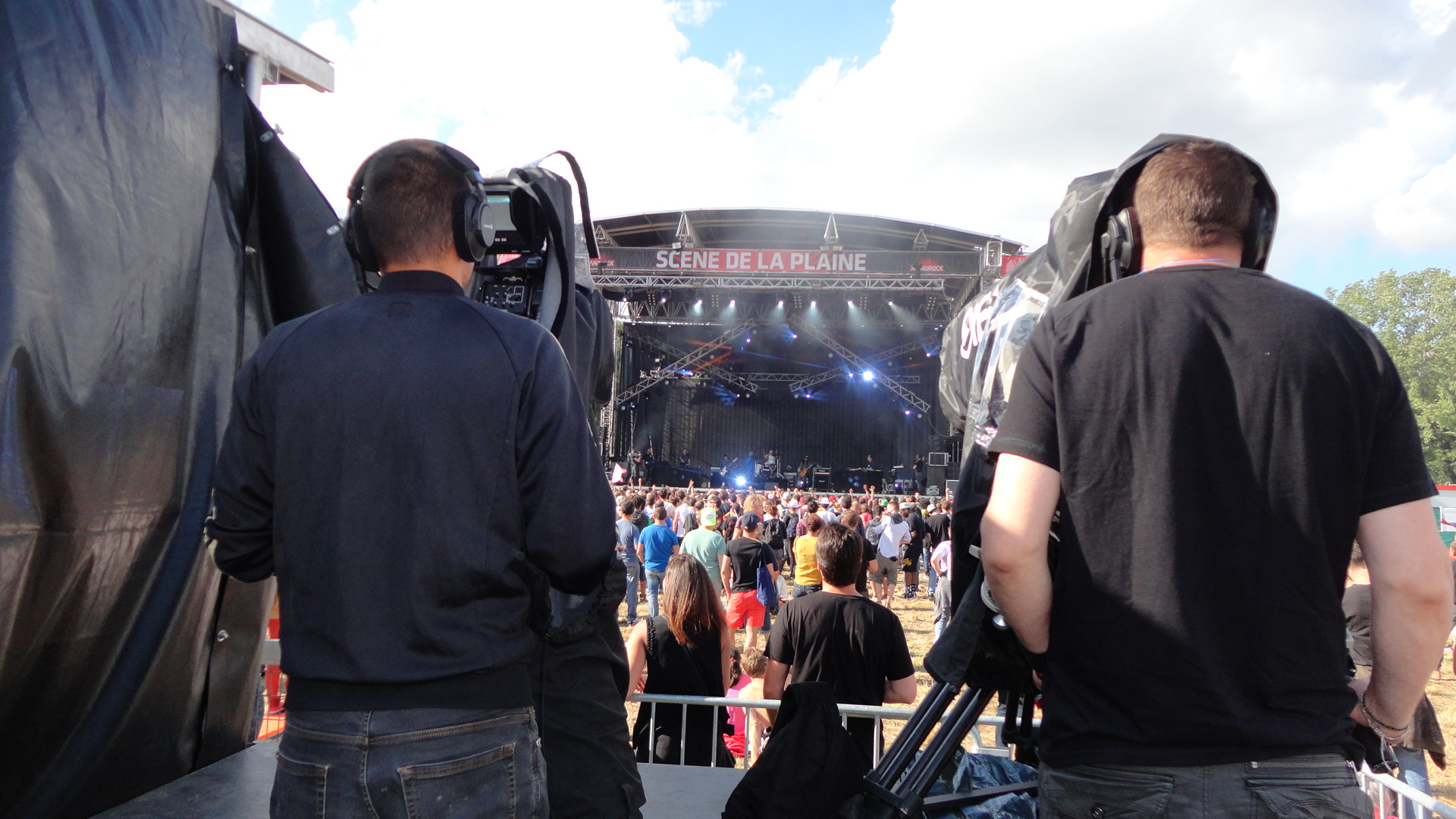 – The Solidays Festival (27, 28 and 29 June): this festival is an event for the fight against AIDS, organised by Solidarité SIDA, which takes place annually at the Lonchamps race course and brings together more than 150 artists and about 170,000 festival goers over 3 days. The proceeds of the festival are donated to organisations fighting against AIDS. This year again VIDELIO and Utram have been mobilised. One Director and 10 technicians have set up a control room with a Panasonic mixer to re direct the signals of the different scenes to the displays backstage, in the VIP area, the catering…. and have equipped different stands with LCD screens and Video projectors to bring life to the stands. 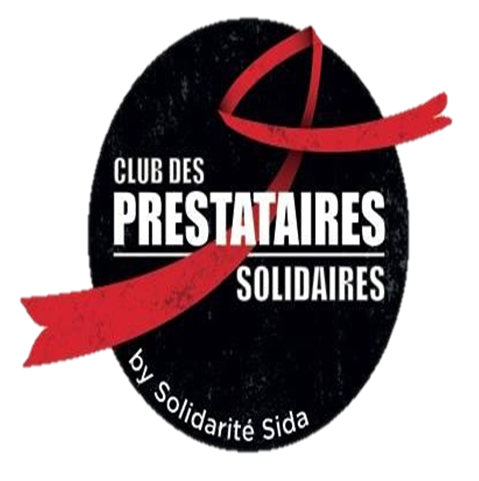 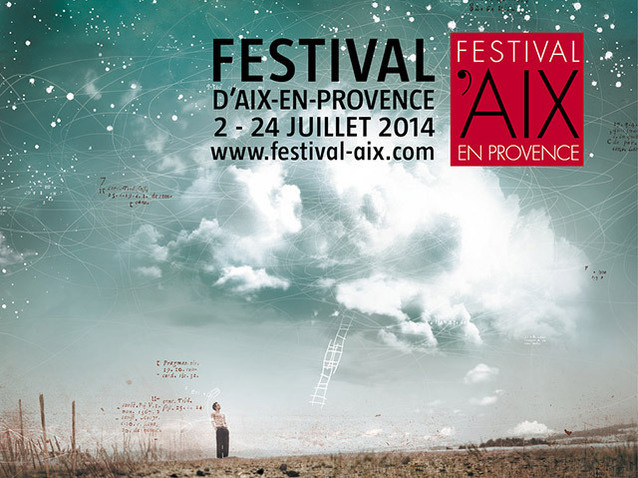 The Lyric Art Fesitval of Aix-en-Provence (2 to 24 July): the international Festival of Lyric arts in Aix-de Provence is a festival of opera and classical music that was created in 1948 and takes place every summer. It is one of the greatest European lyrical festivals with a particular affinity for the Mozart operas. The Utram teams assure the caption with a Multicam control system system in HD (7 cameras including 3 studio versions) and recording spread over KiPRO. 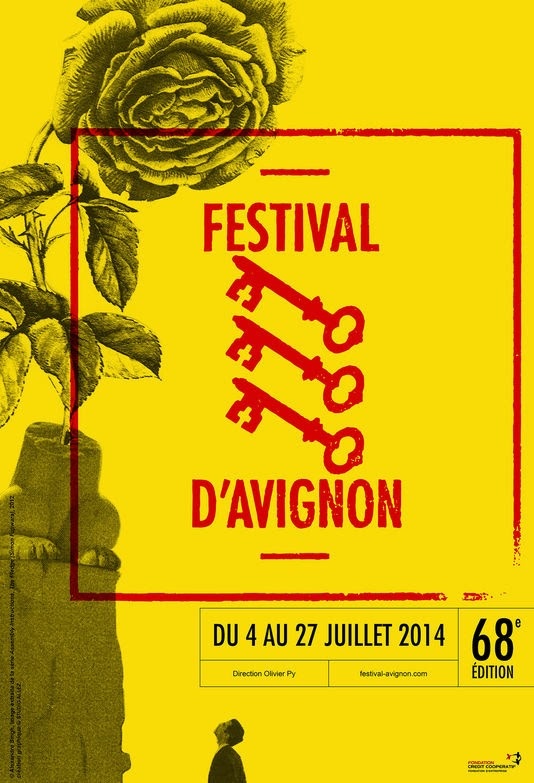 The Avignon Festival (4 to 27 July): this Festival is the most important manifestation of theatrical art and life spectacles in France and one of the most important in the world in terms of number of creations and number of spectators gathered. The Utram teams provide feeds to 12mx6m to MuCEM as well as sound. 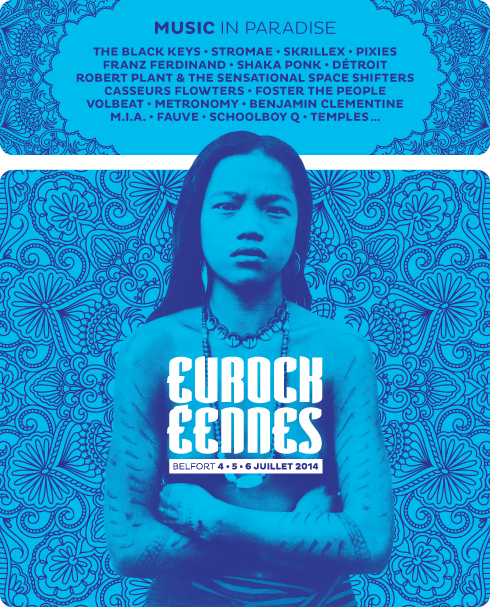 The 14th edition of the Eurorockéennes festival (3 to 6 July): during 4 days the teams of VIDELIO-Events, experts in events services, were responsible for the caption of two large stage concerts, equipping the VIP area and recording pieces of every concert. 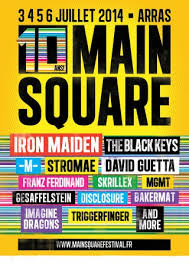 The 10th Main Square Festival (3 to 6 July): 3 VIDELIO-Events technicians have worked for this 10th edition of this festival which has seen a record attendance. For these 3 days of the festival, VIDELIO-Events have realised: the rental of 3 reporting units, one 2 camera control room, creating the site and broadcasting SFRlive TV, filming and eduting of subjects was done throughout the day.

The Festival “Musiques en Stock" (2 to 5 July): nonconformist and without concessions, Musiques en Stock reinforced during this 2014 edition its status of this unique festival with the motto “Free” but also and above all quality. Two technicians of VIDELIO-Events have assured the capture and recording with 6 cameras.

– The Festival "Pause Guitare" at Albi (7-12 july): A festival organised by the Albi Association fluid chords and tremolo which brings every year close to 100,000 festival goers together. The Utram teams have put together a digital control room with Thomson equipment, 5 cameras as well as 2 pan/ tilt heads and a second mixer for effects generating. They have captured the stage activities and back-stage interviews during the intervals. Managed recordings: H264, kipro as well as a DVD burner, to offer artists a DVD of their performance on behalf of the Festival. They also realized the display on a daylight LED RGB 10mm video wall of 15sqm in the park and on a Sony JJTRON 8mm LED mono block wall behind the production side. 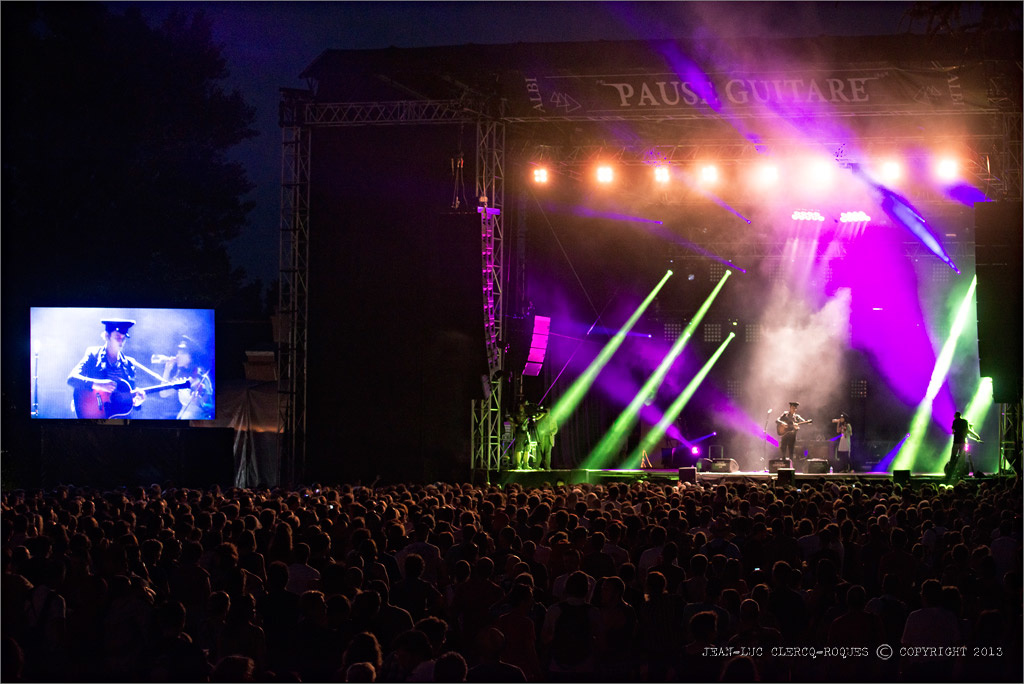 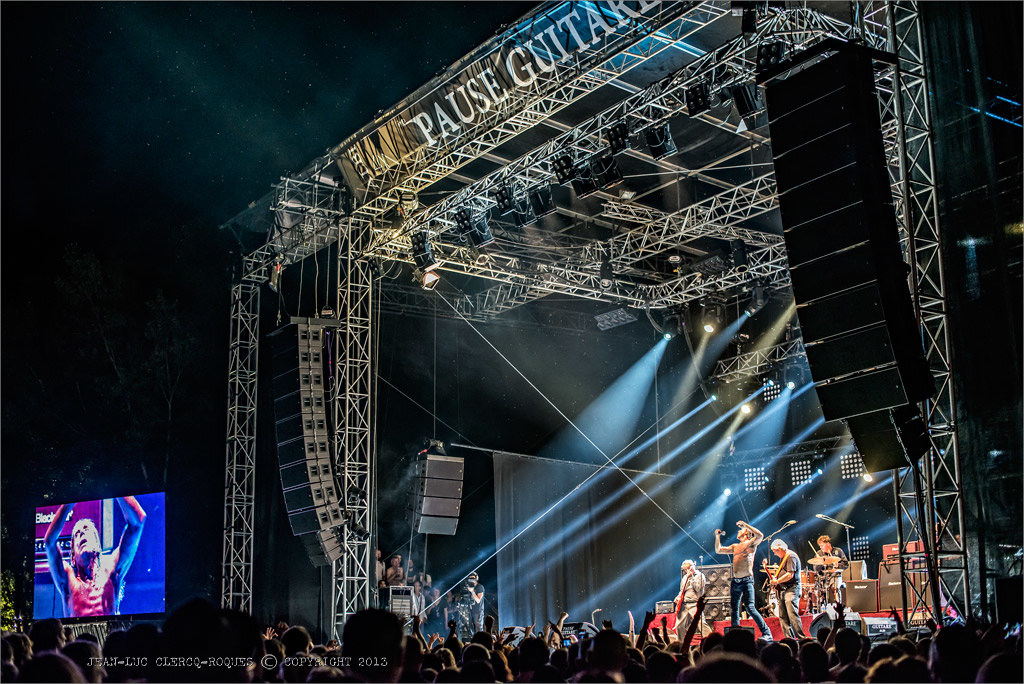 – City of Montpellier (13 July): Display of the world cup football final on the “place de la Comedie” in Montpellier. The VIDELIO-Events teams have deployed a modular screen of 50 sqm, a 2 line-array L-ACOUSTICS system and a set with 2 pan/tilt cameras. 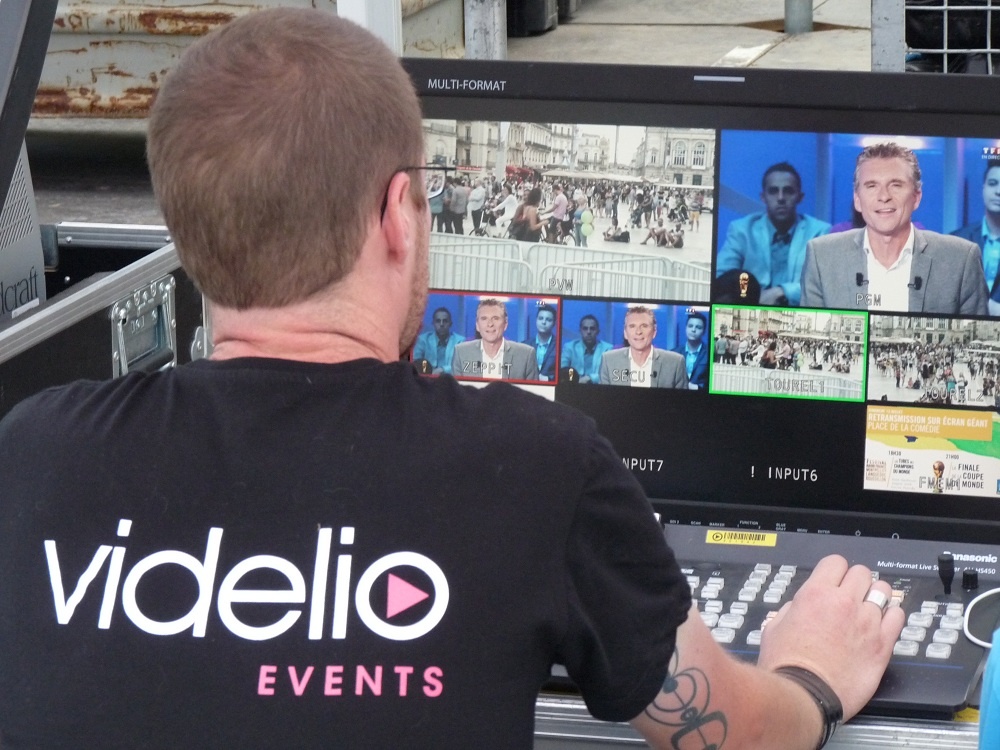 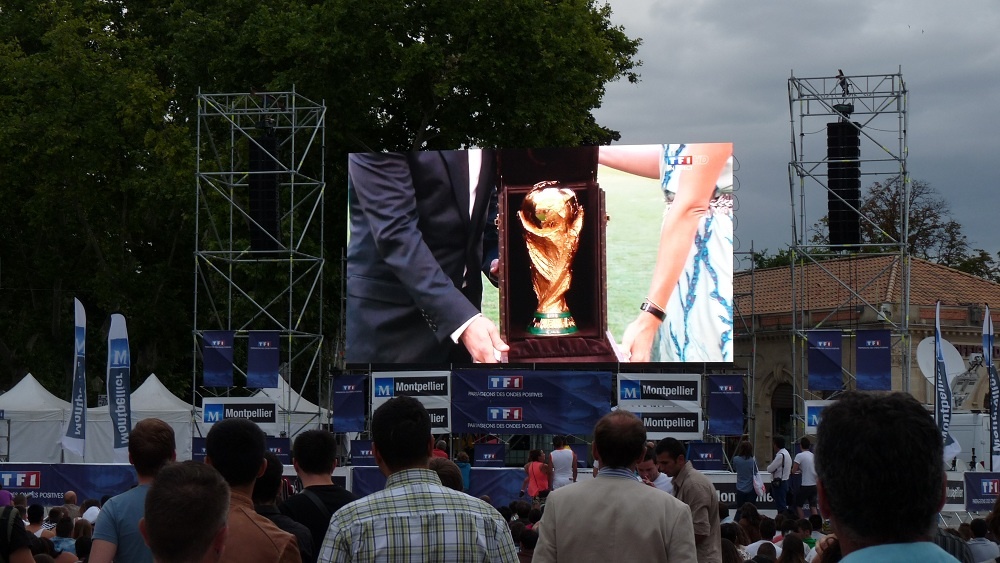